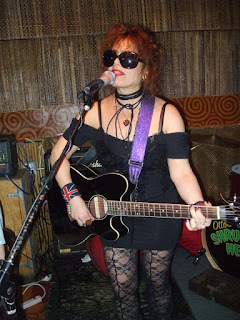 In this episode Sean Kneese talks to Singer/Song Writer and actress Rew Starr. Rew has been called a “Firebrand” by the New York Times and was crowned Miss Underground NYC. The video for her song “Alota mistakes” won the Akademia Music Award for “Best Pop Rock Music Video. Her song “U Suck “was featured on Bad Girls Club and was voted “Punk song of the Year” by Pirate radio on Treasure coast. She appeared on the TLC reality show “Love, Lust or Run w/ Stacy London and has acted in many independent films and plays. Rew talks about her life on the road, her passion for music, her experience teaching guitar, her adventures working on film sets with her dog ZsaZsa Gabone, her friendship with Joey Ramone and other interesting topics.
Posted by MassHypnosis232323 at 12:26 PM