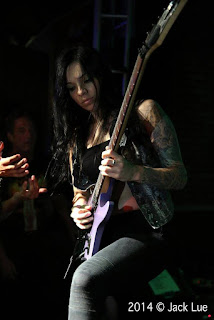 In this episode Sean Kneese talks to singer, songwriter and guitarist Elizabeth Schall. Schall has been involved in the metal scene since 2003. Most recently she has been the vocalist and guitarist of the death metal band Dreaming Dead as well as the guitarist of the California based grindcore band Cretin. Prior to that she was involved with the death metal band Winterthrall and the all female Iron Maiden cover band the Iron Maidens. In this interview, Schall talks about her music, being a vegan, animal rights, her support for Bernie Sanders, the metal scenes in South America and the U.S., women in metal and other interesting topics.
Posted by MassHypnosis232323 at 8:11 AM