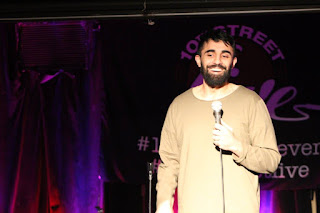 In this episode Sean Kneese talks to stand up comedian and fellow Kean University graduate Danish Maqbool. Danish tells us about his experience growing up as a Pakistani-American in New Jersey and how his life changed after 9/11. He describes how that experience has influenced his comedy and how he became interested in performing stand up in the first place.
Posted by MassHypnosis232323 at 7:32 PM